Current degradation and solutions to the difficulties so as to conserve and contribute to affirming the value of relics is included in the agenda of the scientific workshop “Conservation and promotion of historical and cultural relics in Hanoi Capital, organized by the Hanoi City People’s Committee in collaboration with the Central Vietnam Association of Science and History on September 19.

Thanks to the efficient conservation work, many relics have promoted their value and become a tourist attraction. Photo by Khue Diep

As stated in the inventory list in the Decision No. 5754/QD-UBND dated Oct. 14, 2016 by the Hanoi City People’s Committee, being the city with largest number of relics in the country, Hanoi has 5,922 relics, including one recognized world heritage, 13 special national relics and clusters of relics, and nearly 2,500 national-level and city-level relics. Apart from affirming the position of the “Capital of Heritage” of Hanoi, this figure partly reflects the previous and current challenges and difficulties of the city in managing, conserving, renovating, and promoting value of relics.

According to the Director of Hanoi Department of Culture and Sports To Van Dong, one of the permanent difficulties in conserving heritage is the current degradation of thousands of cultural and historical relics in the area, in which there have been more than 700 significantly degraded and badly degraded relics. Along with that, nearly 200 other relics have been subject to encroachment or occupancy by people for living purpose, resulting in the serious effect on the management and conservation work.

In addition, there also have been some inadequacies and restrictions in restoring and rehabilitating relics in Hanoi. “There are some cases of inadequate restoration and rehabilitation of relics in Hanoi in particular as well as in the whole country in general, for example the restructure and new construction of an ancient monument in Lien Bat commune, Ung Hoa district not long ago. This inadequacy needs to be deeply reviewed for offering solutions as well as preventing the risk of recurrence.’’ – said Dr. Nguyen The Hung, Department of Cultural Heritage (Ministry of Culture, Sports and Tourism)

The Director of Thang Long Institute of Cultural Research Nguyen Viet Chuc said that, there are many reasons for the inadequate restoration and rehabilitation of relics, namely the limited awareness of community, inactive intervention of local authorities, shortage or plurality of staff and personnel at the facility level, cumbersome procedures for licensing the restoration and rehabilitation, etc. As a results, the current status of “passive and rash action or even omission” has been causing great damage to the relics.

Promoting the propaganda and strengthening the management 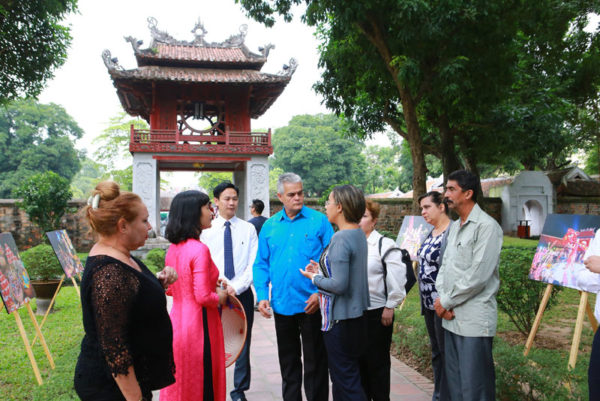 Expressing his view about the conservation of relics, Prof. Dr. Truong Quoc Binh, a Member of the National Council for Cultural Heritage said that Hanoi authorities should promote the application of new and modern technologies in conserving and promoting value of relics and museums, in particular the computerization in managing heritage, as well as complete a database on the cultural heritage of Hanoi.

According to Assoc. Prof. Dr. Dang Van Bai, the Vice President of Cultural Heritage Association of Vietnam, due to the large number of degraded relics and different values of different relic, a flexible and creative way suitable for each case is required. In the immediate future, it is necessary to sort out the relics to be given priority for appropriate restoration activities. In addition, a close collaboration should be ensured between the departments, unions, associations, and local governments to timely prevent any improper restoration and rehabilitation of relics from the beginning, avoiding any significant consequences.

“In the long run, with more and more new management approaches, it is necessary to regularly and continuously maintain the propaganda and education of laws on cultural heritage, and promote the role of social organizations and people in protecting cultural and historical relics”- proposed Assoc. Prof. Dr. Dang Van Bai.

Speaking at the workshop, the Vice Chairman of Hanoi City People’s Committee Ngo Van Quy said that the city authorities are implementing some solutions to overcome the limitations and promote the effectiveness of monument management work. Specifically, the city authorities have requested the Department of Culture – Sports and functional departments to list the relics to be renovated, and restored in period 2018-2020 for the city to support by funds in order of priority. At the same time, administrative procedures for licensing the renovation and restoration have been promptly completed and disseminated, facilitating the localities to strictly comply with regulations. Hanoi authorities also requested the localities to step up socialization activities, effectively play the role of supervision, and prevent the situation of arbitrary restoration which leads to breach of the Law on Cultural Heritage.

“The fund raising should be done publicly, transparently, and scientifically with the supervision of the community” – emphasized the Vice Chairman of Hanoi City People’s Committee.

According to Hanoi Moi nespapers