Dan Phuong is one of the localities actively participating in the movements “Keeping villages and residential groups bright, green, clean, beautiful and safe”, “streets with flowers, houses with numbers, streets with names”… With the strong participation of grassroots organizations, the movement “beautifying roads and streets” was spread in many villages, alleys and hamlets. Many villages have made positive changes, the people enthusiastically responded to the good implementation of socializing and embellishing the environment. In particular, in recent years, the movement “turning weed roads into blooming routes” is being actively implemented by the Women’s Union of Dan Phuong district. The blooming roads are a vivid expression of the new rural appearance, which is increasingly civilized, green – clean – beautiful. The route in Thap Thuy hamlet, Song Phuong commune is one such route. 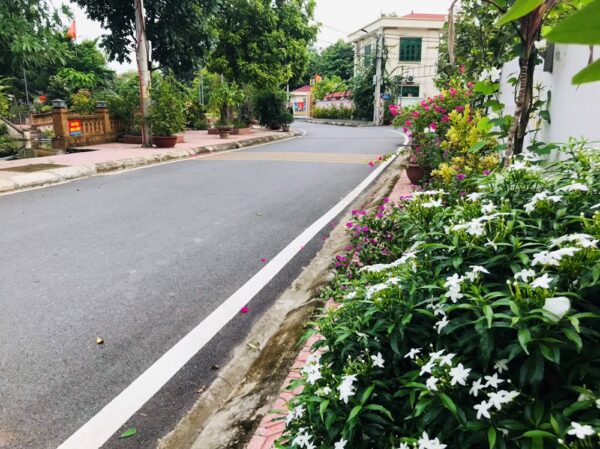 A corner of the “blooming route” in Thap Thuong hamlet

Thap Thuong hamlet located in the center of Song Phuong commune has 326 households with an area of ​​over 4 hectares. It is changing its appearance every day with clean, beautiful, open and wide roads. On both sides, there are rows of colorful flowers and trees amid an increasingly innovative rural landscape. Those are the blooming roads planted and cared for by the hands of women in the hamlet.

Ms. Ta Thi Kim Chung – Chairwoman of the Women’s Union of Song Phuong Commune said that right after the District Women’s Union gave instructions on the implementation of embellishing flowers to beautify the self-governing roads, the Women’s Union of Song Phuong commune came up the plan for planting and taking care of the blooming routes which was enthusiastically responded by most of the women members and people in the commune. The whole commune has built 4 more blooming routes, contributing to changing the face of the homeland more and more beautiful.

Realizing that this is a practical idea, contributing to beautifying the homeland, the women in the hamlet discuss and choose flowers to plant on the 515m-long road of the hamlet. Many types of flowers are easy to grow and produce beautiful flowers all year round such as bougainvillea and ten o’clock flowers. There have been 200 peonies, 250 purple daisies, 50 iridescent flowers, 20 white banyan trees and more than 1000 evening primrose plants planted and cared for by members with a total socialization budget of over VND 40 million and 70 working days. The work of women members has spread to many other families. Just like that, the households on the hamlet road plant antigone, Climbing rose…, many families even supported by painting murals on the wa

lls, many women volunteered their efforts to take care of them… All created the road which is not only green – clean but also colorful.

Many flowers are chosen and cared for by members

Before, this road was only filled with bricks and weeds, but now, with the efforts of female members, the road has become beautiful with flowers. Ms. Nguyen Thi Thoa – Head of the Women’s Union of Thap Thuong hamlet said: “Since the route has bloomed, people in the hamlet in general and women, in particular, have been very excited. People’s consciousness has also changed. No littering, the road becomes greener – cleaner – more beautiful”.

By many flexible and creative ways, the women members of Thap Thuong hamlet have received the support and recognition of the government and the enthusiastic participation of local people. The movement of planting flowers along the road has really spread to every alley, every house, thereby, contributing to making the rural environment of Dan Phuong district in particular and Hanoi capital in general increasingly bright – green – clean – beautiful, modern and civilized.