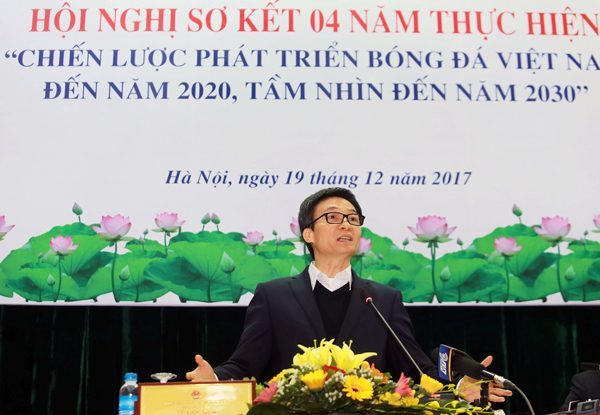 In his opening speech at the conference, Minister of Culture, Sports and Tourism Nguyen Ngoc Thien said that football is a popular sport and receive wide attention. The Vietnamese people always love, cheer and give special attention to this King sport. In addition to improving the physical well-being of all classes, football is also an effective way to strengthen the exchange and solidarity among all classes. The achievements of the National Football Player Team are importantly meaningful to enhancing the patriotism and national pride, contributing to the country’s higher position in international integration. 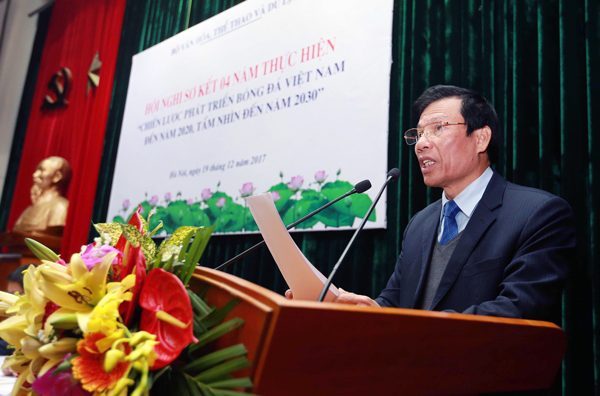 The development of high-class football section is not only a goal but also a general expectation of the whole society. Therefore, on March 8th, 2013, the Prime Minister approved the “Vietnam Football Development Strategy to 2020 with a Vision to 2030”. In the coming time, in order to promote such strategy, Vietnam football will develop according to five directions, tasks, and solutions below: Further renovating and raising football capacity and management efficiency; Promoting football movements with the main focus on school football, replicating the community football model; Strengthening and improving the quality of talented athlete and young football player training, continuing to perfect the youth football competition system; Prômting professional football, improving the quality of V-League and other championships in the national football competition system, thereby raising the quality and achievements of the national football player teams; actively preventing negative activities in football, building a clean and healthy football environment.

At the conference, Deputy Minister of Culture, Sports and Tourism Le Khanh Hai preliminarily sums up the 4-year implementation of the “Vietnam Football Development Strategy to 2020 with a Vision to 2030”, highlighting achievements in all aspects of football in Vietnam after four years of the strategy implementation. Particularly, regarding the football movement development, there are nearly 4000 football clubs nationwide (notably in Hanoi, Ho Chi Minh City, Da Nang and Thua Thien Hue). In 2016, the Vietnam Football Federation was awarded by AFC for the most developed football movement. Then, in 2017, the AFC gave the Vietnam Football Federation the Developed Federation of the Year award and also the “Asian Dream” award was conferred to the Community Football Project in Vietnam.
Especially, the national teams also achieved remarkable progress after four years of the strategy implementation. For instance, at the 17th ASIAD in 2014, the U23 male football player team was included in round 1/8 and the female team won the 4th place. In 2016, U19 teams competed in the World Futsal U20 Finals, and in the quarterfinals of the World Cup while the U15 team won the Southeast Asia U15 championship. In 2017, there are 6 teams to be qualified for the finals of Asian Championships (national male and female teams, national U23 team, national U19 team, national U16 team and national Futsal male team). In addition, the national U15 team also won the Southeast Asian Championship 2017, the national female team won the gold medal in the 29th SEA Games, the Futsal female team won the silver medal, and the Futsal male team won the bronze medal in the 29th SEA Games. 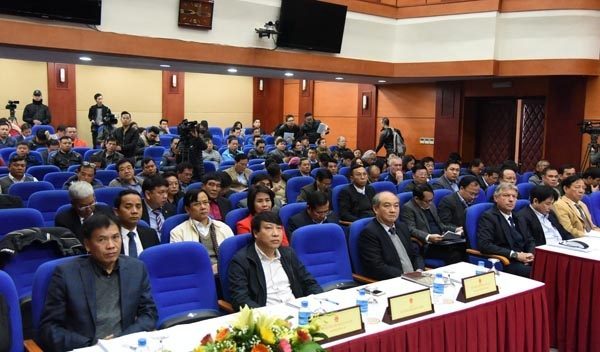 Moreover, the development of professional football together with the improvement of professional football leagues’ quality has also made significant progress. There are 55 Top Football Clubs across the country, including 14 professional clubs, 10 first-class clubs, 14 second-class clubs, 7 female football clubs, and 10 futsal clubs. The professional football system has gradually being improved and initially expanded in number and quality of professional football clubs in accordance with the criteria of the World Football Federation.
Apart from the aforementioned outstanding results, the report also pointed out the 10 shortcomings and weaknesses of Vietnam football, which were paid much attention by the participants in the conference. At the conference, 14 speeches on certain matters such as experience in implementing the Vietnam football development strategy to 2020, with a vision 2030 in Thanh Hoa province; Orientation, organizational consolidation and effective operation of the Vietnam Football Federation; Football referee work – status and solutions; School football in Ho Chi Minh City; Some solutions for development of professional football in Vietnam, etc. were heard.
Speaking at the conference, Deputy Prime Minister Vu Duc Dam highly appreciated the achievements of Vietnam football. However, football in Vietnam still has shortcomings and weaknesses and develops not commensurate with its potential. Therefore, at this conference, he requested to point out clearly the development focus of football in Vietnam: “Is it young football, movement football, Vietnam football federation structure, or professional league? What are strengths and weaknesses? Have the professional league organizers well done? Does the prior competition arrangement happen? Do they play fairly and actually? It is obvious that football violence is not good. What to be discussed is how bad it is. Why do the professional leagues attract fewer spectators than those for children and mass? Has the referee work been done fairly?
Also according to the Deputy Prime Minister, specifying the shortcomings and their reasons as well as the need to seriously look at each task and goal achieved and not achieved in the Strategy to define responsibilities of each organization and individual is not to criticize each other but to find common voice for the development of football in Vietnam. For Vietnam Football to develop professionally, the roadmap must be very basic and scientific in accordance with international practices and persistent at the same time. The results at this meeting were not satisfactory to him; hence, he hoped to receive the opinions of experts about the interests and proposal. “You are all definitely more enthusiastic than me and have more knowledge about football than me. Hence, we must gather ideas and draw something useful for the future. All people meeting me said that Vietnamese people love football, so there is no reason to say we have no potential for development”, Deputy Prime Minister emphasized.