With the permission of the state and Hanoi management agencies along with the efforts of the Vietnam Football Federation, the semi-finals and final of the Vietnam Women’s National Cup 2021 will take place on November 10 at the Vietnam Youth Football Training Center (My Dinh, Hanoi).

The Vietnam Women’s National Cup 2021 kicked off in May and has already passed the semi-finals. However, due to the impact of the Covid-19 pandemic, the tournament had to be suspended and at this time, despite many difficulties, the Vietnam Football Federation still determined and tried to organize the third prize match and the final match of the tournament. 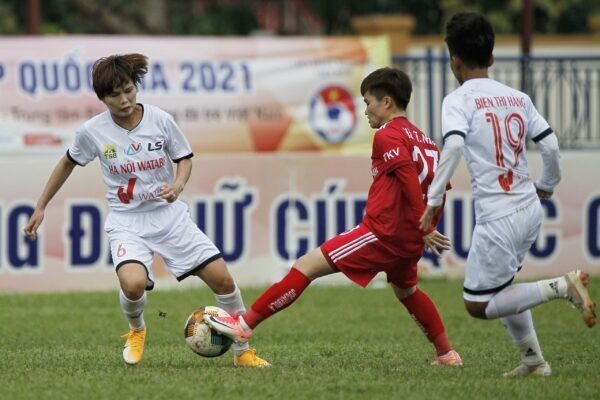 These efforts are to maintain the plan to organize the national women’s football tournaments, thereby creating conditions for players to have the opportunity to compete and the Coaching Board to conduct the selection process for the team, in order to prepare for the 2022 AFC Asian Cup Women’s Finals and look forward to the 31st SEA Games in Vietnam.

Notably, the final match of the season will be a rematch between the two strongest women’s teams in Vietnam at the moment, namely Hanoi I Watabe and Ho Chi Minh City I. In the past two seasons of the National Cup, despite efforts, Hanoi has not been crowned champion yet. In the first time, the tournament was held in 2019, Hanoi lost to Phong Phu Ha Nam 0-1 in the final. In the 2020 season, coach Nguyen Anh Tuan and his players again lost to Vietnam Coal Minerals on a penalty shootout in the semi-finals.

Due to the Covid-19 pandemic, the final match between Hanoi I Watabe and Ho Chi Minh City I will take place without an audience. Instead, the match will be televised live on channel VTV6 at 3:30 p.m. on November 10, at the stadium of the Vietnam Youth Football Training Center.