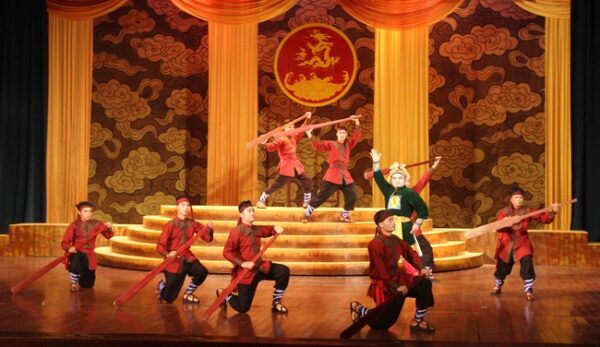 The plan is implemented to preserve and promote the value of the traditional operas of Hanoi capital, which focuses on 04 main types: Cheo, Cai Luong, Puppetry and Drama.

In addition, it also aims to raise awareness and roles and responsibilities of the Party committees, authorities, political system at all levels and people, especially for the young generation of the Capital in the task of preserving and developing the art of traditional opera. Promoting innovation and creativity, forming unique artistic and cultural products imbued with the cultural identity of Thang Long – Hanoi, and at the same time being able to adapt to contemporary art trends, contributing to building “Creative city”, developing cultural industries, improving the spiritual, cultural and aesthetic life of the people, promoting the image of the Capital to the world.

The contents of implementation include propaganda; collecting and building a list of traditional opera and theater art forms: Cheo, Cai Luong, Puppetry, Professional and amateur drama; Restoration of a number of ancient plays, excerpts and typical melodies. In addition, research to put the art of traditional opera into tourism service activities to serve tourists in accordance with reality which, focusing on propaganda and introduction of the arts of Cheo, Cai Luong, Puppetry and Drama in the promotion of tourism in the Capital. Through bilateral and multilateral cultural exchange and cooperation activities, Vietnamese culture week in countries in the region and the world, international cultural events are held in Hanoi to introduce, promote the capital’s traditional art forms to international friends. Along with that, invest in and upgrade facilities to meet the enjoyment needs of visitors such as theatres, auxiliary services, and flexible performance time according to the needs of each tourist object. …

Hanoi also reviewed and implemented the strategic planning of human resources for the field of performing arts in the capital; create breakthrough mechanisms and policies for training and fostering the successor team, developing high-quality human resources, attracting and appreciating talents, creating conditions for them to promote their talents, stick with and dedicate themselves to the capital for a long time; diversify forms of education and training; attach importance to cultural and aesthetic education for the public, promote the inclusion of art education in educational curricula at all levels; strengthen international cooperation with prestigious education and training institutions in the country, the region and the world in training, especially in strategic human resource training.

The localities focus on training and fostering the neighboring young artisans; adopt policies to support and maintain the activities of special traditional theater clubs and guilds; encourage and create all conditions for the elderly artisans to have creative space, continue to dedicate their talents and pass on their craft to the local young generation.

Deploying performances to serve the capital’s public, popularizing the works in the conservation list to a wide range of people. Putting excerpts, plays, and jokes into the school theater program, performing at schools, performing services at industrial parks, export processing zones for workers in the capital and other subjects as directed by the City People’s Committee.

The requirement of implementing the plan is to preserve typical traditional works of art and pass them on to future generations. Continue to encourage the capital’s literary and artistic classes to create top-notch works of art, contributing to the country’s traditional art treasure. Traditional artworks, in addition to ensuring traditional folk elements, need a combination of entertainment, modern and creative styles.