Right after the issuance of code of conduct for cadres, civil servants, sub-civil servant and labourers working for the bodies belonging to Ha Noi city and the code of conduct at public areas, the district people’s committee has formulated the action plan for the period of 2018-2020, with a view to creating a radical change in the mindset, attitude, behaviour in the process of undertaking public affairs and occupational expertises, and gradually building a contingent of cadres, civil servants, sub civil servants and labourers of the district “Disciplined –  responsible – wholehearted – friendly”, thus contributing to the upkeep and enhancement of the fine cultural traditions of the Capital and the country. 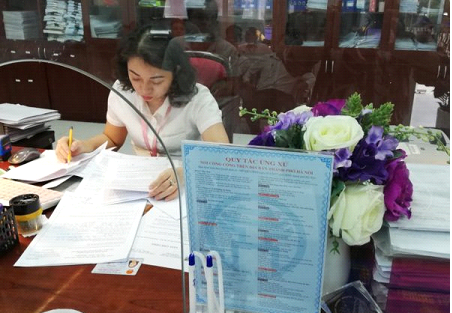 The code of conduct is regularly placed on the working desk of every cadre, civil servant in the district people’s committee as well as 13 wards’

In order to rapidly put the 2 codes of conduct into practice, the North Tu Liem district’s Party Committee and People’s Committee have immediately implemented the awareness raising and propaganda of the codes among the entire cardes, civil servant, sub-civil servants and labourers as well as the masses in the area. The propaganda has been made in differrent forms i.e mass media, radio, portal; news board… By doing so, the 2 cods’s contents have been gradually going down into the daily life of the people living the the district site.

Associated with the movements and drive

In order for the 2 codes of conduct to be intrinsically materialized, the North Tu Liem district has launched an emulation campaign to carry out the codes of conduct in conjunction with other movements as “the entire people unify in building a cultural life”, a call for “building a industrialized cultural lifestyle”, criteria of  “Advanced – Innovative; Unified – Disciplined; Environmental preservation; Elegance – Unselfishness”… By the end of 2018, there has been 162/181 street groups receiving the title of cultured street group; 91/98 units awarded as cultured title and 55.961/63.020 families obtaining cultured title.

Tightening the control and commending in a timely manner

After the 2 year of implementation, the North Tu Liem district has been seen as city’s spotlight in the propagation of the 2 codes of conduct. The outcomes achieved in the executing process of the 2 codes of conducts have made practical contributions to the building of Hanoians legant, civilized, modern; as well as for North Tu Liem district’s in particular.