After two years of implementation of the Program No. 04-CTr / TU of the Hanoi Party Committee on “Developing cultural-social development, raising the human resources quality of the Capital, building elegant and civilized Hanoians in the period of 2016-2020”, the field of culture – sports in Hai Ba Trung district has many positive changes.

Over the past years, Hai Ba Trung district has stepped up the construction of cultural institutions and invested in building material facilities for cultural activities. The district has 217 residential areas, 761 residential groups. Up to the beginning of 2018, there are 116 community houses and 54 lent venues used to organize residential activities. 95% of community houses have necessary equipment such as: soundproof system, function rooms, tables and chairs… to serve the conferences, activities of the residential groups, associations, organizations and some clubs.

Hai Ba Trung district focuses on preserving, embellishing and promoting the value of typical cultural and historical relics. At the same time, to identify key investment sites. Up to now, most of the monuments in the area have been renovated, repaired and operated in good manners. The total cost of renovation of relics is VND 141.819 billion, of which socialization source is VND 123.108 billion. Typical examples include the renovating and embellishing works of Vien Minh pagoda, Hoa Ma pagoda, martyrs’ gravestone house and garden yard of Quynh pagoda, Hai Ba Trung temple, road to Lien Phai pagoda… The District has received a certificate of sculptural relief for Interregional II – O Cau Den Rampart; commemorative works when Uncle Ho visited the mass education class at Luong Yen Primary School.

The movement of building cultural residential groups and cultural families continues to be maintained, contributing to positive changes in building cultural life in population areas. Annually, the rate of cultural families reaches from 81% to 88%, the cultural residential groups of 70-75%, the cultural units of 65%. To well implement the city’s Directive No. 01/CT, respond well to the “Year of urban order and civilization”. Promote propaganda and mobilize people to respond to the movement “All people do not throw garbage, waste in the street and public places”, mobilize people to promote the movement to keep environmental sanitation, build a green, clear, beautiful street. Continue the effective implementation of the Plan No. 116/KH-UBND of the City People’s Committee on the implementation of the National Action Plan on Domestic Violence Prevention and Control until 2020 and Plan No. 04/KH-UBND of the People’s Committee of Hai Ba Trung District on the implementation of the “Vietnam Family Development Strategy until 2020, with a vision to 2030” in the district. Actively propagandize and regularly organize International Happy Day on March 20; Vietnamese Family Day on June 28; International Day for the Elimination of Violence against Women and Children on November 25.

In sports activities, the mass sports movement has been further promoted, raised on the quality and number of participants. Many active models, sports clubs have been established attracting many people from the elderly to adolescents and children. Facilities for physical training and sports of the people are invested synchronously in the area.

By the end of 2017, there are over 400 sports clubs in the district. Hai Ba Trung Center of Culture, Information and Sports has cooperated with the Federation of Labor, District Youth Union, Department of Education and Training to organize more than 100 competitions, sports friendly match, participate in 92 competitions and expanded competitions of the city. Every year, the district organizes the Olympic Day for people’s health and launches the Running Race by Hanoimoi Newspaper for peace with nearly 30,000 participants. Especially, the district successfully organized the 9th Hai Ba Trung Olympic games, competed in various sports competitions at the City Olympic Games and got high achievements.

From 2015, the number of medals won at the City and national competitions of Hai Ba Trung district reaches 400 medals (89 gold medals, 171 medals, 140 bronze medals, of which 17 gold medals nationwide).

Strengthen calling for socialization of facilities in sports activities. 185 outdoor exercise units have been installed in 14 wards to serve the people. Sport activities are organized from district to grassroots, creating a movement of sports widely in the officers and people in the district. By the beginning of 2018, the number of people exercising sports regularly reached 39.7%, the number of sports families reached 32.6%. 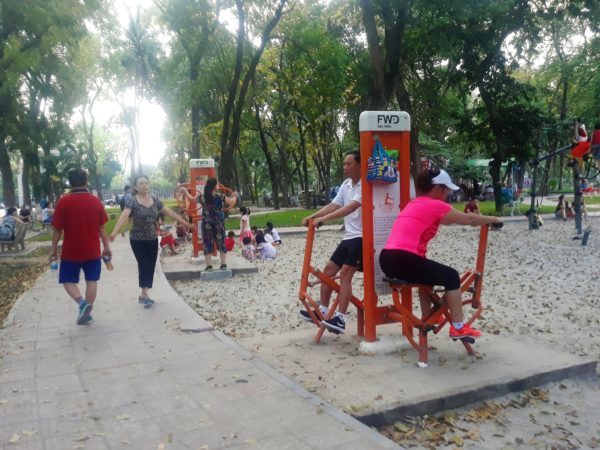 In the coming years, Hai Ba Trung district will continue to focus on the socio-cultural development in the area. Accordingly, the district will organize, review and make plans on investment in community activities house and install physical training and sports equipment in residential areas, ensuring the targets set by the Resolution of the XXV Party Congress; to build a healthy and civilized social environment, continue to promote the movement “All people unite to build a cultural life”, focus on building “Elegant and civilized Hanoians”; to develop the cultural, artistic and sports movement; to complete the construction of a new Center for culture and sports in the district…