Panorama of the meeting 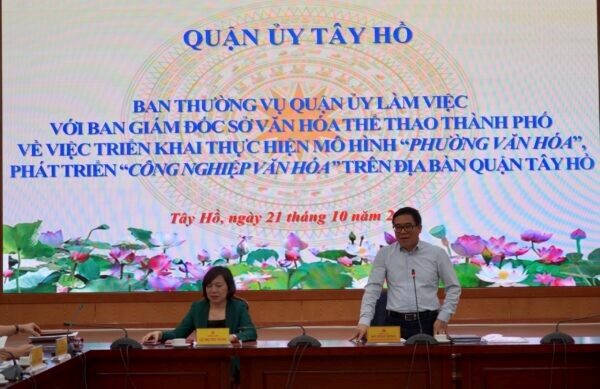 At the meeting, the representative of the Standing Committee of Tay Ho District Party Committee, Standing Deputy Secretary of the District Party Committee Nguyen Tuan Anh reported on the unique potentials and advantages of Tay Ho District. Through many congresses, Tay Ho district determined to strive to build a service-tourism-culture center of the capital. With a long tradition of history and culture, a favorable geographical location, and many landscapes favored by nature, especially, Tay Lake is an extremely valuable landscape with many attractive cultural heritages, converging opportunities, advantages and challenges in the current renovation period. It is very necessary to pay attention to investment in the construction and development of the “Cultural Industry” in the district. This is an important “highlight” of the district in implementing the task and concretizing Resolution 33 (Term XI). 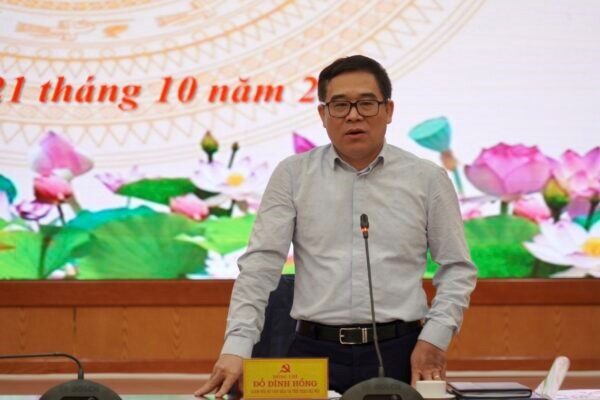 Member, Secretary of the Party Committee, Director of the Hanoi Department of Culture and Sports Do Dinh Hong speaks at the meeting

As a green lung in the heart of the city and one of the beautiful landscapes of Hanoi Capital, with wide-open space, beautiful and quiet scenery and a scenic area with 71 historical relics, each of which is a unique architecture and a vivid history page reflecting the development of the ancient Thang Long citadel, the district has actively invested in a tram system around Tay Lake connecting a number of relics such as Tran Quoc pagoda, Phu Tay Ho, Kim Lien Pagoda, Tao Sach Pagoda, Van Nien Pagoda, Dong Co Temple… to become cultural tourist routes, which are attractive destinations for domestic and foreign tourists. 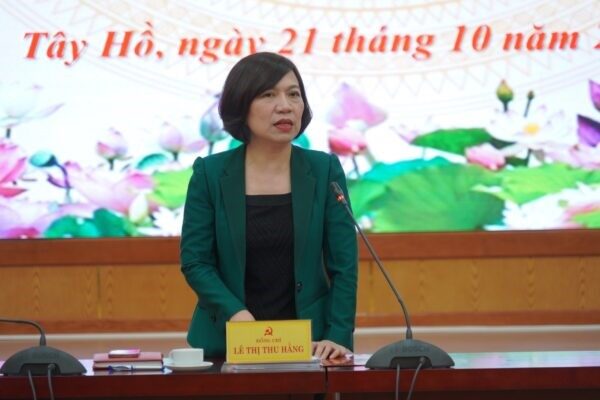 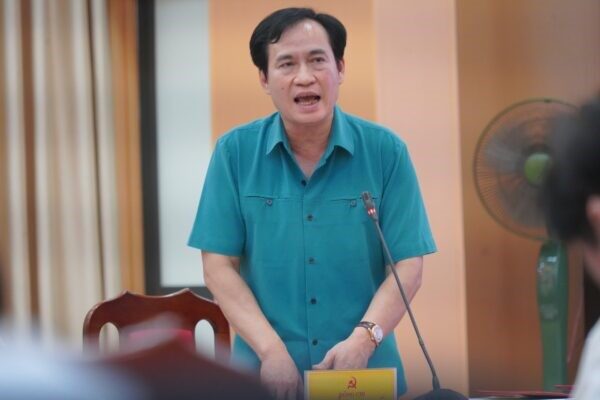 In the district, there are 129 hotels and accommodation facilities, including a system of famous internationally standardized hotels such as Sheraton, Intercontinental and Thang Loi hotel, meeting the needs of many visitors, creating favorable conditions for the development of service and tourism activities.

In order to develop the cultural industry in Tay Ho district, Standing Deputy Secretary of Tay Ho District Party Committee said that the district will focus on implementing 9 key tasks and key solutions, of which the priority is given to investment in traffic technical infrastructure projects, improving traffic connectivity to tourist areas and attractions, continuing to effectively implement projects in the field of culture and tourism, promoting research and application of science and technology in the management and development of the cultural industry; implementing the Project “Building a database system with a digitized foundation for cultural preservation, relic management and tourism development in Tay Ho district”, developing, diversifying and improving the quality of cultural tourism products based on the District’s advantages; forming and connecting tourist routes to visit the district by road and waterway (Tay Lake), expanding the development of historical and cultural tourism, trade village tourism, ecotourism, community tourism,… speeding up the Hellokitty entertainment park project in Yen Phu ward, the Tay Lake water park project, Opera House project in Quang An ward, the Lottle Trade Center project in Phu Thuong ward, creating a art performance space brand in Tay Ho district…

On the implementation of Program 06 of the Hanoi City Party Committee – 17th term and Plan No. 176/KH-UBND of the Hanoi City People’s Committee on “Developing culture, improving the quality of human resources, building the Elegant and civilized Hanoi people for period 2021-2025”, Vice Chairman of Tay Ho District People’s Committee Pham Xuan Tai said in addition to the key tasks of building a cultural environment, preserving and promoting tangible and intangible cultural heritage values in the area, improving the quality of human resources, the district will focus on improving the quality of cultural models such as Cultural Family, Cultural Residential Quarter, agencies, units that meet typical cultural standards, continue to build “Cultural Wards” towards building urban civilized wards.

To promote the role of grassroots culture, Vice Chairman of Tay Ho District People’s Committee Pham Xuan Tai proposed the Department of Culture and Sports to report and consult the Ministry of Culture, Sports and Tourism and the City People’s Committee on removing difficulties in zoning for protecting relics, building an operating mechanism for the ward-level Culture and Sports Center, community houses, Cultural House of the residential group; proposing for re-licensing karaoke activities, planning for advertising at the side of the houses and promulgating regulations on management of signs to ensure urban beauty.

Deputy Secretary of the District Party Committee, Chairman of Tay Ho District People’s Committee Nguyen Dinh Khuyen said that Tay Ho district is implementing detailed planning of the area in the dike, focusing on investment in building technical infrastructure and developing cultural industry. Between 2021 and 2025, the district has determined to implement 7 schemes including “Organizing space for performing arts and street food in Tay Ho district”, “Tourism, cultural services and attractions serving the model of Do paper craft village, Buoi ward”, “Developing lotus cultivation on a number of small lakes in the areas around Tay Lake”, “Tay Ho Lotus Tea introduction and enjoyment center in Quang An ward”, “Development of Nhat Tan peach blossom craft village in association with tourism services”, “Point of introduction and promotion of traditional craft village products – Phu Thuong sticky rice”, “Development of Tu Liem Kumquat Tree craft village in association with tourism”. He also suggested that the Department of Culture and Sports pay attention to creating conditions for the district to implement a number of projects for the creation and development of Tay Ho square and several typical cultural relics in the district to develop cultural industries in the district. 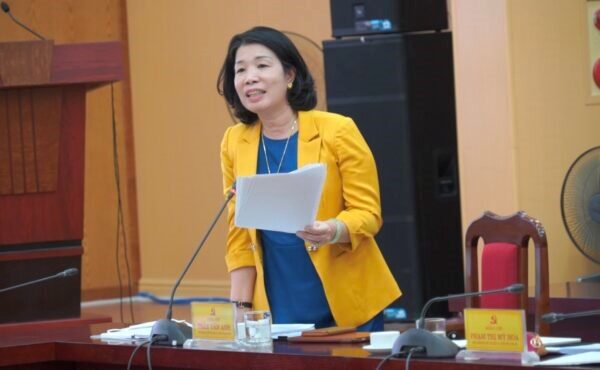 Agreeing with the content of the report, the Deputy Director of the Department of Culture and Sports Tran Thi Van Anh highly appreciated the potential of Tay Ho district and the orientation that the district has set. Intending to develop into a service-tourism-culture center of the capital, Tay Ho district has all the favorable natural and human conditions to become a cultural district. In the next term, she wished the district would continue to pay attention to the field of building grassroots cultural life, starting with Cultural Families, Cultural Quarter Groups, and Cultural Wards with models such as “Safe family in Covid”, “Typical artist family”, “Family with good business”… with culture as the foundation to develop urban civilization, well implementing 02 Codes of Conduct, paying more attention to the field of heritage, relic management, especially propaganda and perfecting the standardization of signs, signboards, advertising and lighting, investment management and promotion of cultural and sports institutions from district to grassroots level, identifying and investing in cultural creative spaces, restarting the Trinh Cong Son pedestrian street, developing water sports such as windsurfing, sailing, hot air ballooning, organizing branded sports tournaments and launching Trinh Cong Son Award, etc.

Speaking at the meeting, the Member of the Party Committee, Secretary of the Party Committee, Director of the Hanoi Department of Culture and Sports Do Dinh Hong agreed with the report and recommendations of the Standing Board of Tay Ho District Party Committee to jointly exchange and gradually remove difficulties. He hoped that in the coming period, the district would continue to promote the strengths and potentials of Tay Lake and Red River. In the future, the district needs to develop central axes from Tay Lake leading to Co Loa and Tay Lake axis to Ba Vi to arrange creative spaces and select new products, technologies and services to serve a large number of residents and guests, bringing into play the potential and strengths of the urban core district, exploiting potentials and resources of land, developing and creating spaces on the water surface, in the air, inside and outside the dyke, developing service resources with new ways such as meeting and honoring businesses, creating motivation for businesses to continue contributing to the district, paying attention to new businesses, identifying key tasks in 2022 and the following years and key tasks to promote the district’s strengths associated with a specific roadmap. He highly appreciated cultural activities at the grassroots level. He wished that the district would continue to preserve and promote the value of heritage sites in the area associated with green space, continue to develop physical training and sports in schools, armed forces and mass sports movements around Tay Lake. The district needs to focus on developing in 3 important areas, including Nature; Heritage, historical traditions and building cultural lifestyles, building elegant and civilized Tay Ho people.

At the meeting, Member of the Party Committee, Secretary of the Tay Ho District Party Committee Le Thi Thu Hang received the provocative comments of the Director of the Department of Culture and Sports and the opinions of the comrades in the delegation and affirmed that in the coming time, Tay Ho district will continue to promote its resources to find new directions and ways to continue transforming. With a team of dedicated staff with cultural background and state management, it will create a new and more beautiful and spacious appearance, creating attractiveness for the general brand of Tay Ho district. The district determines that it will promote the strengths of each area to invest resources and orientate to coordinate with the Party committee, local government and the majority of the people to continue to build a cultural environment and promote the existing values ​​​​so that the people in the area can enjoy the cultural values.

In the coming time, the district will develop a roadmap to concretize the contents, clearly define daily and long-term tasks, take the cultural industry development scheme as the focus to coordinate with other departments and branches to solve difficult problems, propose mechanisms and policies to effectively implement Results of Program 06 of the Hanoi Party Committee, term XVII on “Developing culture, improving the quality of human resources, building the Elegant and civilized Hanoi people for period 2021-2025”.